It is the main town on the Côte de Beauté. Royan is first and foremost one of the main seaside resorts on the French Atlantic coast, with five sandy beaches, a marina that can accommodate more than 1,000 boats and an active fishing port.

All along the large beach, you can enjoy the promenade under the arcades where there are many shops and restaurants with different specialities. 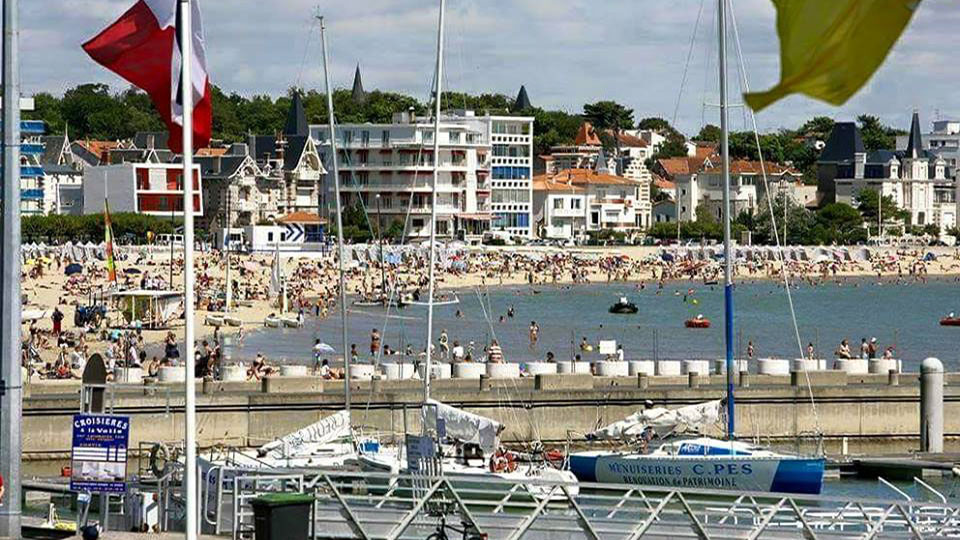 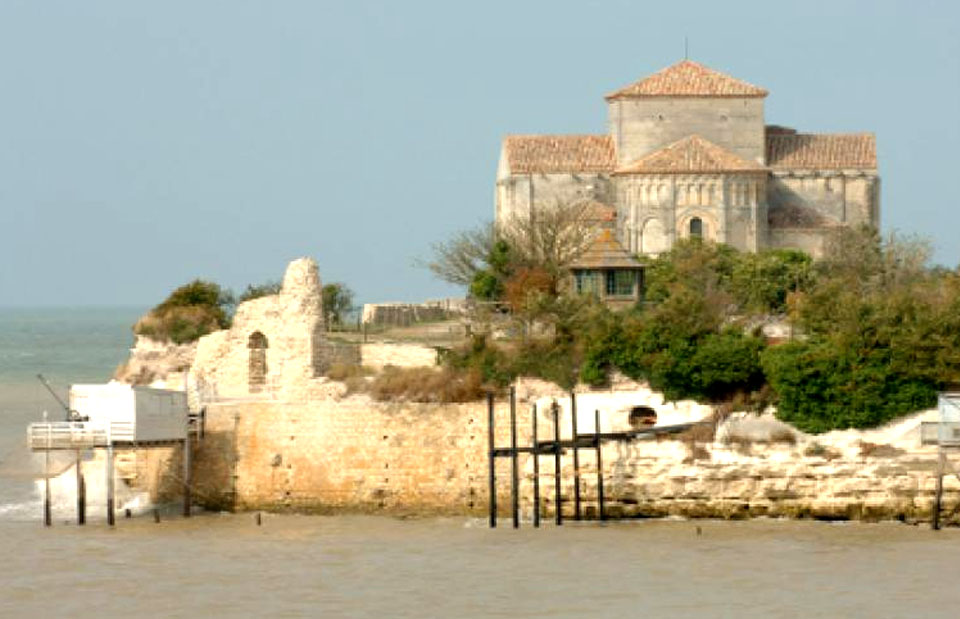 Talmont, an ancient bastide founded in 1284, this small town on a promontory overlooking the Gironde estuary was once a formidable stronghold, of which only a few sections of the ramparts and the remains of a medieval half-ruined tower (white tower) remain.

Talmont is also a small port where sturgeon was once fished for its eggs (caviar). The streets of the village, which intersect at right angles, are lined with old houses, deliberately very low to limit the wind, covered with pink tiles and almost all whitewashed. In summer, many hollyhocks add a colourful touch. At the edge of the cliff, the church of Sainte Radegonde, overhangs the waves with its characteristic silhouette.

LA PALMYRE: this small seaside resort, whose fame owes much to the La Palmyre zoo, one of the main French zoological parks, also benefits from the proximity of the state forest of La Coubre, the bay of Bonne Anse and the beaches of the Côte Sauvage.

Since 2015, La Palmyre has been part of the Gironde Estuary and Pertuis Sea Marine Park, the largest in mainland France. 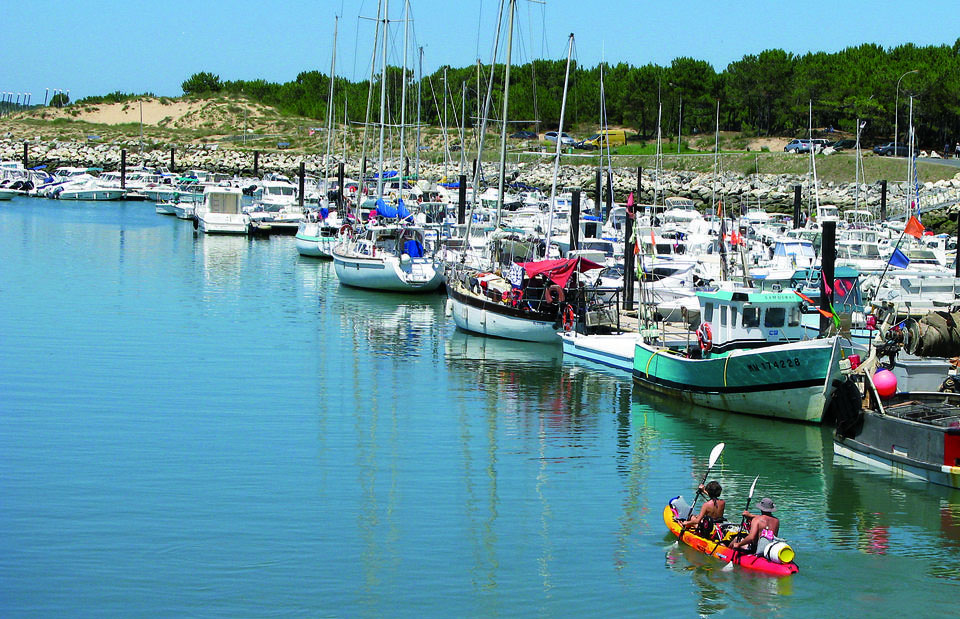 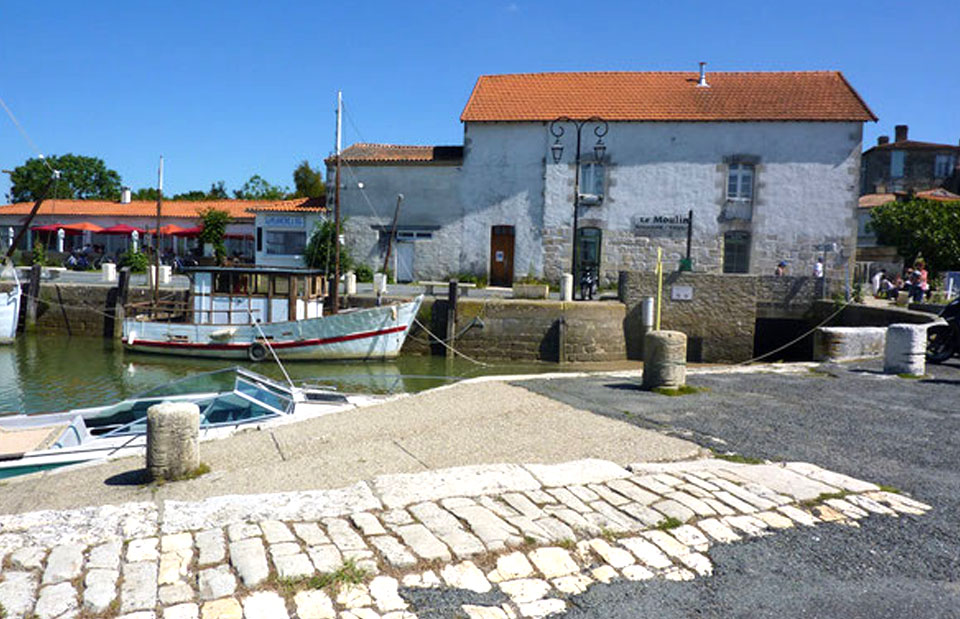 Mornac-sur-Seudre is a small commune on the Altlantic coast near Royan. The small village of Mornac is organised around its small fishing port and the medieval streets of its historic centre, which is largely pedestrianised and dotted with magnificent art workshops.

The traditional white-painted houses lined with trèmières roses are joined by the covered market, the old Romanesque church of Saint-Pierre and the few remains of the castle of the Barons of Mornac, which watches over the surrounding marshes. On the outskirts of the old town centre, new suburban neighbourhoods that are gradually expanding towards the neighbouring town of Breuillet bear witness to the growth of the commune, which belongs to the "great suburbs" of Royan.

Mornac-sur-Seudre is, along with Talmont-sur-Gironde, one of the two "Most Beautiful Villages in France" in the Royan area. It also belongs to the network of "Villes et métiers d'art" and since 2011 to the network of "Villages de pierres et d'eau", a label initiated by the Conseil Général to promote exceptional sites with the particularity of being located on the edge of a body of water (sea, river, pond...).

La Palmyre Zoo is a zoological park, created in 1966 by Claude Caillé, located in La Palmyre on the Altlantic coast near Royan. It extends over more than 18 hectares within the state forest of La Coubre with more than 1600 animals for 115 species.

Nestled in the heart of an 18-hectare pine forest, La Palmyre Zoo is now one of the most popular tourist sites in Charente-Maritime. Every year, 700,000 visitors flock to the zoo to see more than 1,600 mammals, birds and reptiles representing 115 different species.

As well as being a pleasant and entertaining outing for the public, La Palmyre Zoo also plays an important role in the conservation of endangered species, scientific research and environmental education. It records 200 to 300 births each year, a success that can be explained by the care given to the animals' diet and well-being. Founded by Claude Caillé in 1966, this unique site has become one of the most renowned zoological parks in France and a key element of the region's sentimental heritage. 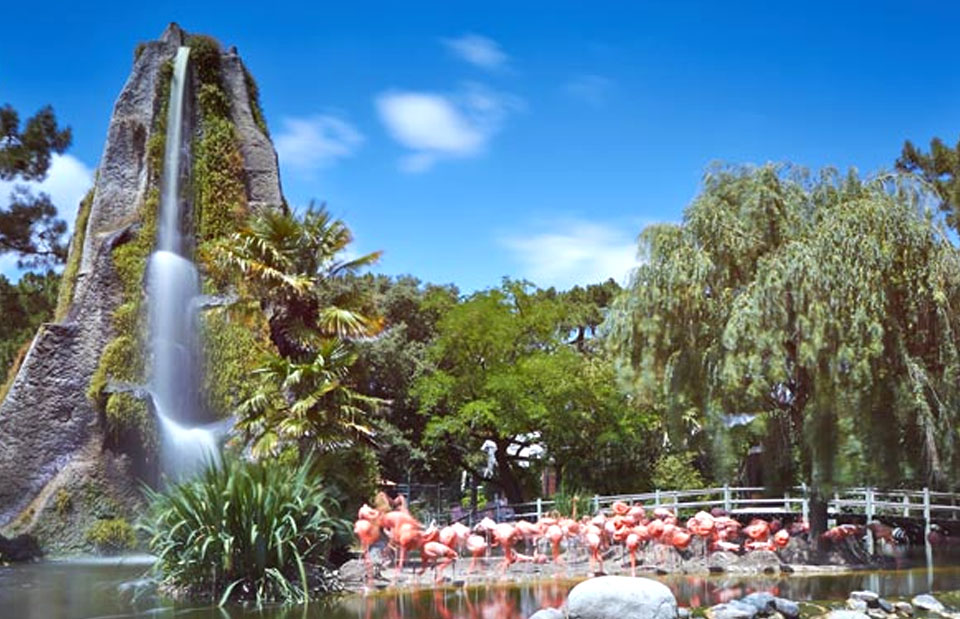 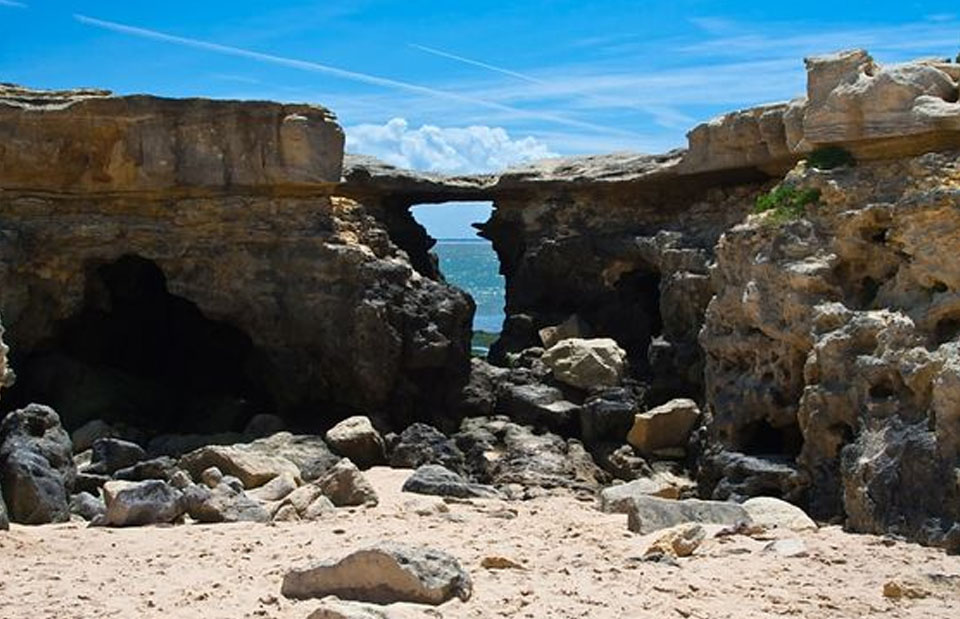 Located at the crossroads of the customs path and the Platin beach in the commune of Saint-Palais-sur-mer on the way to the Grande Côte, the Devil's Bridge is a natural site of limestone rocks forming a bridge, very popular with fishermen and walkers. Its name comes from a legend...

A fisherman who was lost during a violent storm is said to have run aground with his boat on the reefs at the end of the peninsula. He is said to have sold his soul to the devil in exchange for his life: the devil built a stone bridge for him, enabling him to return to dry land.

Between 1584 and 1611, 300 stones were extracted from the peninsula to build the Cordouan lighthouse on the estuary's horizon.

The Puits de l'Auture is a hole naturally dug in the rock where the waves rush in to create geysers between the rock and the nearby white tiles. At high tide, litres of water gush out between the rocks, a fantastic sight.

Just like a devil's bridge, a legend has been built up: the rumbling that can be heard there is that of two lovers who voluntarily drowned in the face of their families' incomprehension when they refused to marry. 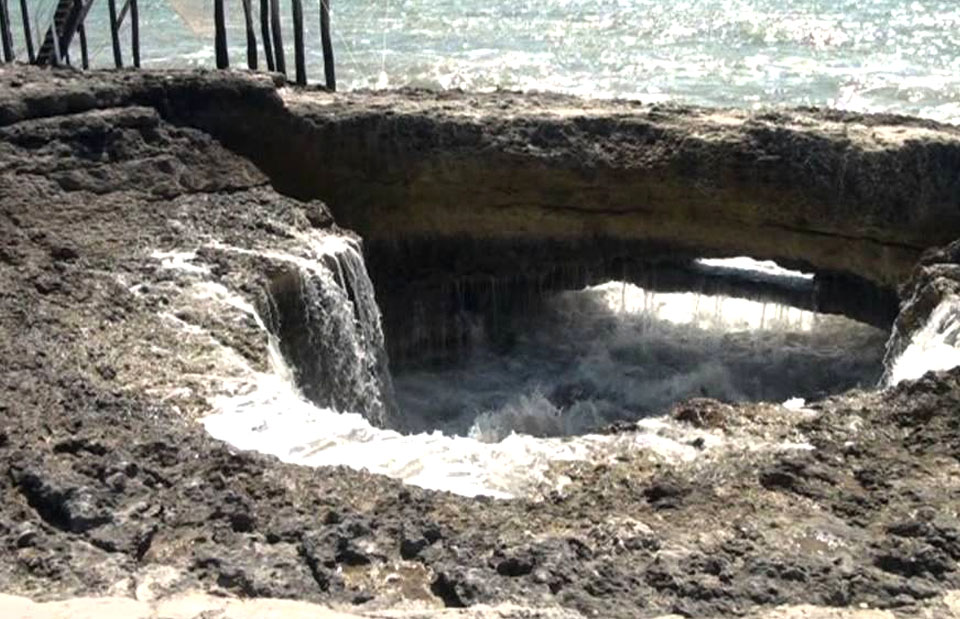 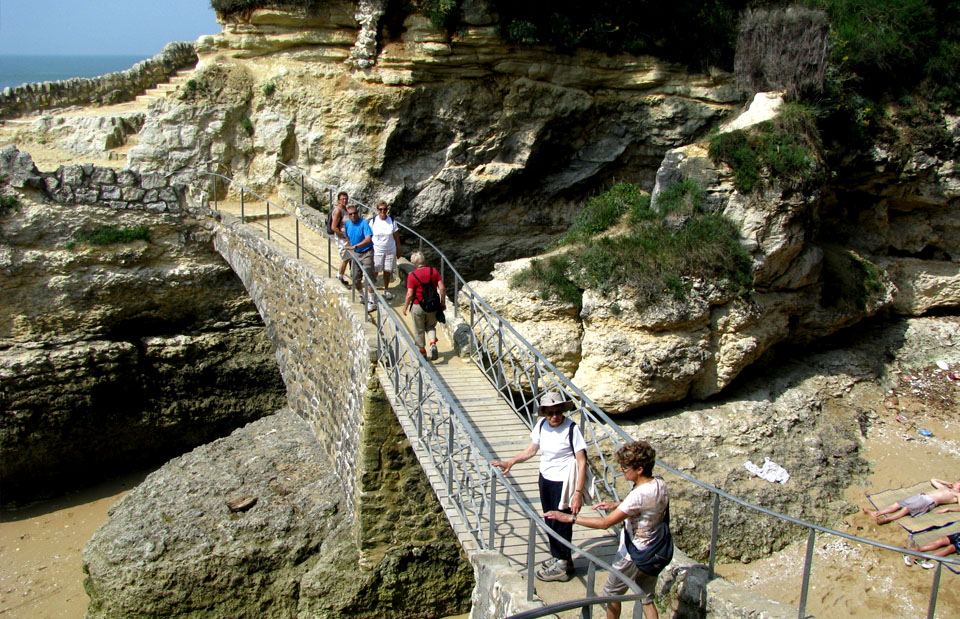 THE CUSTOMERS' PATH: on the banks of the Gironde estuary, this path was used by the brigade agents on foot or on horseback to keep an eye on the coast and prevent smugglers of all kinds of goods at the time.

Weapons, alcohol, tobacco, salt or fabrics were the goods that were smuggled in. Today, this path has become a pedestrian one and allows nature lovers to walk between the beach of the office and that of Nauzan.

The Cordouan lighthouse is located seven kilometres out to sea on the Cordouan plateau, at the mouth of the Gironde estuary. It lights up and makes traffic safer in the two passes allowing access to the estuary: the Grande passe de l'Ouest, marked out at night, which runs along the northern shore from the Coubre bank, and the South pass, which is narrower and not marked out at night. It is located off the coast of Royan and was built between 1584 and 1611. It is the oldest lighthouse in France still in operation. Sometimes called the "Versailles of the sea", the "lighthouse of kings" or the "king of lighthouses", it is the first lighthouse to be classified as a historical monument. The Cordouan lighthouse can be visited and it takes 45 minutes to reach it by ferry. 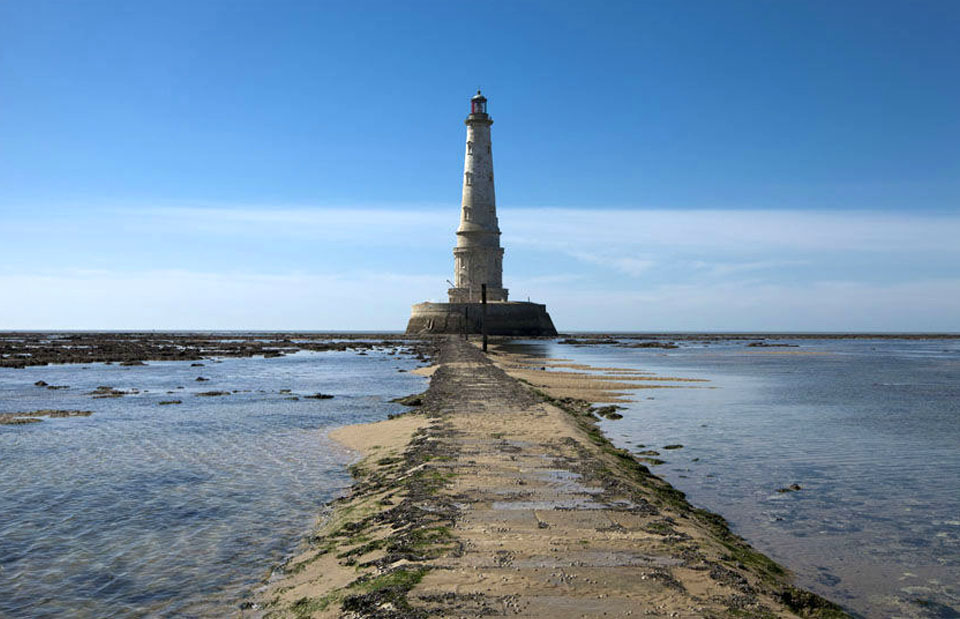 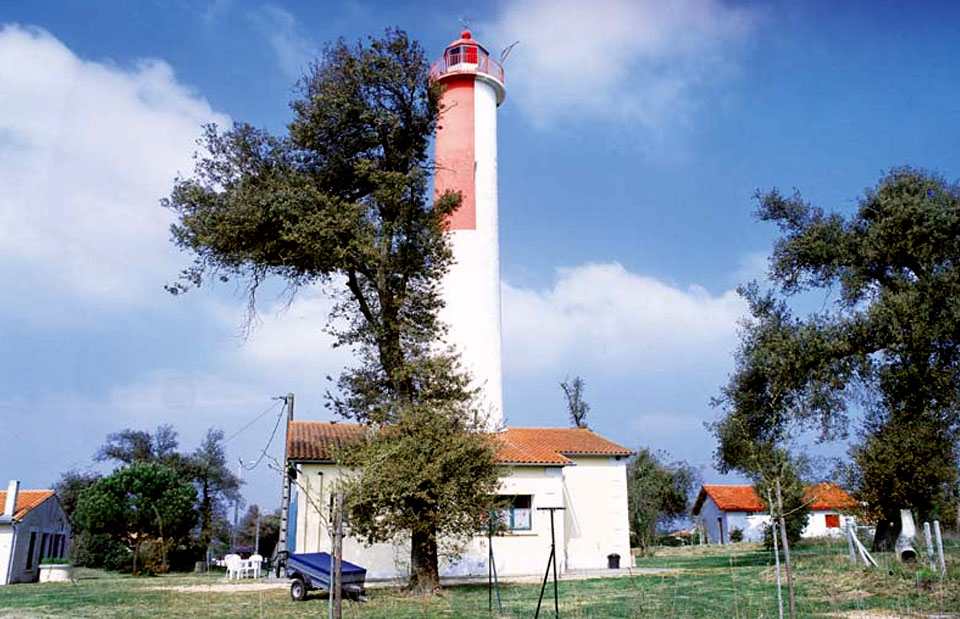 The Lighthouse of Terre-Nègre : Tour de Puyraveau, Tour de Chassaigne or Tour de Terre-Nègre..... This tower is located in the vicinity of the village of Puyraveau and the dwelling of Saint-Palais sur Mer. It was built in 1772 near the port of St-Palais. It was 26m high with an external diameter of 3.16m and an internal diameter of 1.78m. It had a square capital. To access the capital, one had to climb 143 steps. In 1836, a lantern was installed at the top. This transformation gave birth to the Terre-Nègre lighthouse.

It is 36m high and white except for the upper half, which faces west, which is red.  The light is fixed, white, made up of a 4th order lenticular device with a focal length of 0.15m, and is lit by rapeseed oil before its electrification.

La Coubre Lighthouse is located in the commune of La Tremblade, at the northern end of the Gironde estuary. This part of the coastline is in perpetual movement and is an unstable and tormented place. In 1690, the existence of a fire beacon was reported on the Pointe de la Coubre. The first wooden lighthouse was lit in 1860. 1895: The stone lighthouse built 1.5km from the coast is put into service. Ten years after its construction, sea erosion had taken its toll and a breakwater was built to try and slow down the advancing waves, but the ocean was inexorably eating away at it. 1904: construction of the current lighthouse located 1.8 km away, commissioned on 1 October 1905. After climbing 300 steps, a 360° panorama offers a breathtaking view of the Gironde estuary, the La Coubre forest, the Arvert peninsula and the Ile d'Oléron. The visit continues with an eco-museum at the foot of the lighthouse, recounting its history and the various materials necessary for its operation. 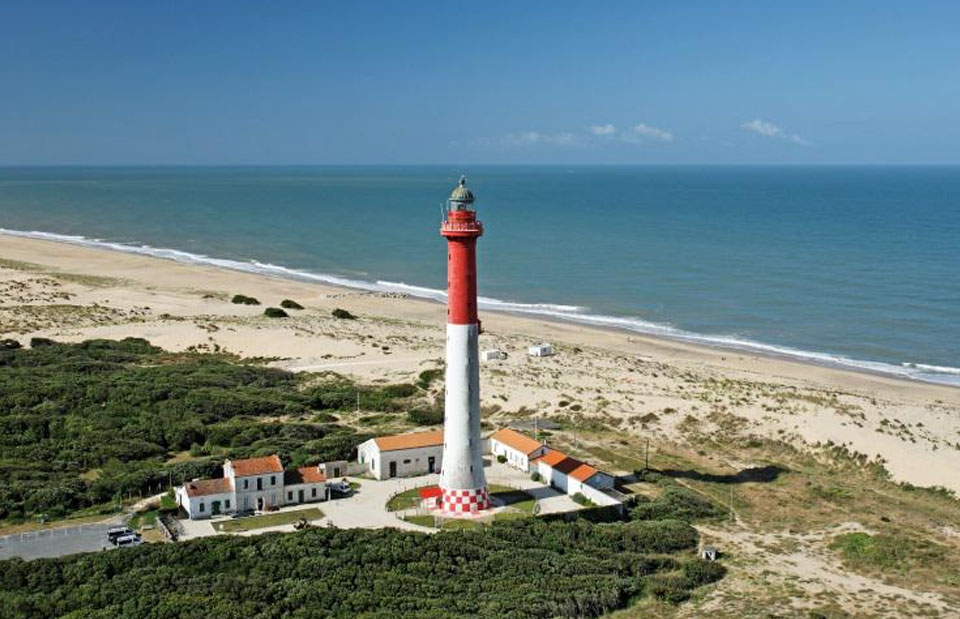 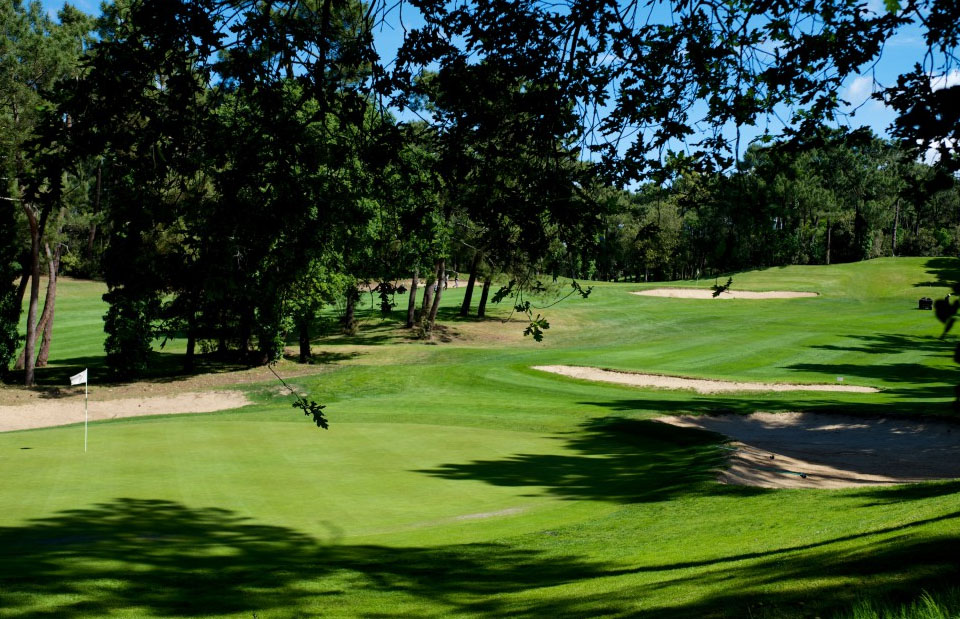 This is certainly one of the most beautiful golf courses in the south-west of France. This magnificent course is located in the heart of the Coubre forest and allows everyone to play golf in a unique setting.

It is an 18-hole golf course with a driving range, a 6-hole compact course and a 9-hole pitch & putt course. Golf enthusiasts will not want to miss a moment at hole 14, which offers a unique view of the ocean!

Note: if the course is always so green, it is thanks to the watering provided by the town's water treatment plant. The reputation of this structure is well established.